About Radon Gas in Ireland

Radon gas acts in stealth in many ways. This odourless, tasteless, and colourless substance comes into a structure, builds up, and poses a gradually expanding threat to any within. Despite the dangers, the problem gets little media coverage or attention.

Despite the lack of discussion and debate, it still can pose significant harm to humans. Therefore radon gas mitigation during home and building projects are vital, and the law.

What Is Radon Gas?

Radon gas is a naturally occurring radioactive gas that results from the decay of uranium in rocks and soils.

The government categorises radon gas as a Class 1 carcinogen and blames it for 300 cases of lung cancer per year. Radon leeches from the ground that contains deposits of uranium and thorium in igneous rock. These radioactive elements naturally degenerate over time, giving off radon gas.

Radon gas comes from natural processes and, in most cases, escapes harmlessly into the atmosphere. It poses no threat when it moves from the ground into the open air.

Over 55% of all human exposure to dangerous levels of radiation comes in the form of radon gas.

What Are the Dangers of Radon Gas?

Radon gas leaks into a building from the ground underneath and slowly builds-up in the air inside the structure. Once above ground, radon quickly degenerates into radioactive particles. When inhaled, they attach themselves to lung tissue, where they can form a serious cancer risk. No current scientific evidence ties radon gas exposure to any other respiratory ailments or forms of cancer.

The government says that radon gas poses the highest risk of cancer and death from radiation. Next to smoking, it accounts for the second-highest rate of lung cancer deaths.

This gas poses the most serious threat when it rises into a structure that has adopted modern energy-saving techniques such as double-glazed windows and sealed door frames. It enters through cracks in floors or also holes where wires and pipes enter the home. Older and drafty homes, in most cases, allow radon gas to escape without building up to serious and damaging levels. Radon gas can also enter a home through well water and pose similar risks.

What Areas Present the Most Danger?

Ireland has two major regions where the threat of radon gas rates the highest. Almost all of Connaught, with the exception of coastal areas, potentially could see 20% or more homes affected by radon gas levels above safe levels. The southeastern coastal areas around Leinster and Munster also have higher levels of radon penetration. 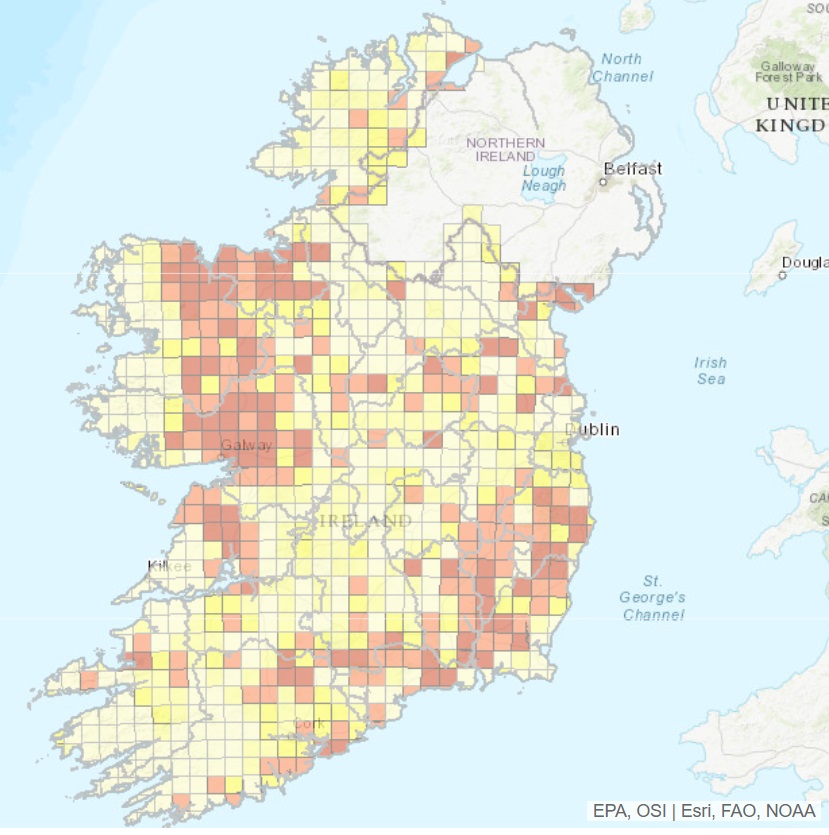 This does not mean that other areas are in the clear. Most of Ireland has five per cent or more structures that potentially have dangerous levels of the gas. Almost no part of the country experiences no threat from the gas.

Radon gas and other hazardous materials are regulated under the Safety, Health, and Welfare at Work Act of 2005. Employers have the responsibility and obligation to test for elevated and unsafe levels of radon and other substances.

Specific areas where employers must perform tests include:

Workplaces that have levels above 300 must implement mitigation procedures to bring radon levels back below legally acceptable rates.

In all cases where the government requires radon gas reporting, the EPA provides a template to follow.

How to Mitigate the Threat of Radon Gas?

The EPA requires radon measurement and remediation service providers to register with the government.

Experts agree that ‘do it yourself’ solutions to radon gas contamination can make the problem worse if not performed properly. A contractor who specialises in radon remediation gives property owners the best chance to make their structure both safer and legally compliant.

The best fix for radon comes from having a contractor install a radon control or removal system.  Passive measures block radon from entering the structure. This includes tracking down points of entry and sealing them off. Active measures, including pumps, will provide an effective way of removing the threat.

The best way to mitigate radon gas contamination, however, lies in building a radon-proof building from the start. Install a gas permeable aggregate topped with plastic sheeting to stop the flow of radon gas into the structure. Make sure that all cracks and other openings are well sealed. Finally, install a three to four-inch gas-tight pipe from underneath the structure to the outside, creating a natural vent for the gas. A vent fan can turn it into an even more effective removal device, actively drawing the gas from inside to outside.

Making radon gas a priority can keep your home or business safe from one of the world’s most deadly carcinogens. Start the process of protecting yourself and, if an employer, complying with the law, by testing as soon as possible.

We use cookies on our website to give you the most relevant experience by remembering your preferences and repeat visits. By clicking “Accept All”, you consent to the use of ALL the cookies. However, you may visit "Cookie Settings" to provide a controlled consent.
Cookie SettingsAccept All
Manage consent

This website uses cookies to improve your experience while you navigate through the website. Out of these, the cookies that are categorized as necessary are stored on your browser as they are essential for the working of basic functionalities of the website. We also use third-party cookies that help us analyze and understand how you use this website. These cookies will be stored in your browser only with your consent. You also have the option to opt-out of these cookies. But opting out of some of these cookies may affect your browsing experience.
Necessary Always Enabled
Necessary cookies are absolutely essential for the website to function properly. These cookies ensure basic functionalities and security features of the website, anonymously.
Functional
Functional cookies help to perform certain functionalities like sharing the content of the website on social media platforms, collect feedbacks, and other third-party features.
Performance
Performance cookies are used to understand and analyze the key performance indexes of the website which helps in delivering a better user experience for the visitors.
Analytics
Analytical cookies are used to understand how visitors interact with the website. These cookies help provide information on metrics the number of visitors, bounce rate, traffic source, etc.
Advertisement
Advertisement cookies are used to provide visitors with relevant ads and marketing campaigns. These cookies track visitors across websites and collect information to provide customized ads.
Others
Other uncategorized cookies are those that are being analyzed and have not been classified into a category as yet.
SAVE & ACCEPT